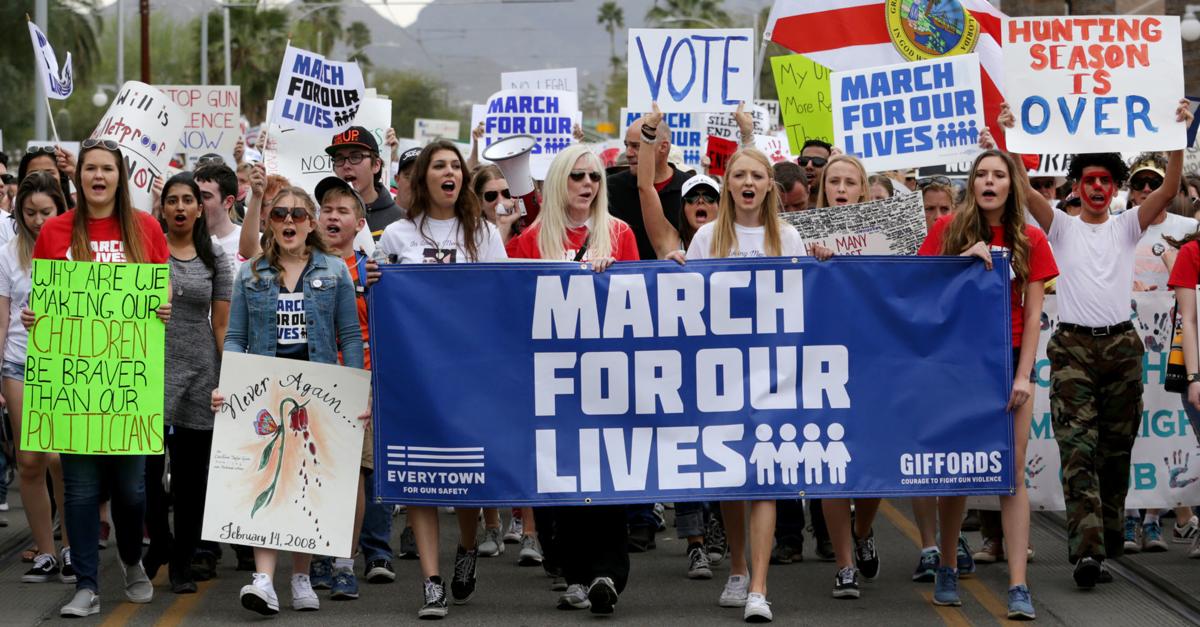 Students and others lead the way during the March for Our Lives gun-violence protest last March. Thousands marched from Jacome Plaza downtown to the University of Arizona Mall.

Student activists have taken their fight to reform mental-health interventions in schools to the Arizona Capitol, working with lawmakers to craft legislation that is receiving bipartisan support.

State Rep. Daniel Hernandez, a Tucson Democrat, has been working with students affiliated with March for Our Lives Arizona since before the legislative session on a bill he introduced last Tuesday, HB 2597. If passed, HB 2597 would mandate school districts to create a centralized plan for identifying and responding to student mental-health crises, according to the bill’s language.

Districts would do this by synthesizing and establishing districtwide “safe school plans” by the 2022-2023 school year, the bill says. Arizona Superintendent of Schools Kathy Hoffman would be tasked with assembling a safe-schools task force to identify best practices and models .

The seven-part safety plans would serve as a one-stop resource for administrators, teachers and staff looking to help students who could be struggling with a mental-health issue, according to Joshua Ashton, a senior at Empire High School and the leader of the student group’s Southern Arizona region.

The state does not currently require school districts to handle student mental-health crises in a specific way, a spokesman from the Department of Education recently told the Arizona Daily Star. This lack of oversight allows districts to address mental-health concerns in whatever way they see fit.

Some local districts, for example, employ districtwide, universal crisis identification and response procedures, the Star found. Others leave individual schools to handle such concerns on a case-by-case basis.

The bill would require districts to develop protocols school personnel should follow when responding to “suspicions, concerns or warning signs of emotional or behavioral distress in students” or students who could be a danger to themselves or others.

It also calls for districts to train staff in how to recognize, screen and respond to students in distress and to form a referral agreement with at least one community organization where students can receive health, mental-health, substance-abuse and social support services.

“A lot of this was based off ideas that came about from the (March for Our Lives Arizona) summit in November,” Ashton said. “We condensed (the ideas) … and figured out what could work, what was possible. Once we felt ready, we started bringing it to legislators.”

The students’ original bill included a provision that would have required the state to give districts additional funding to hire school counselors, Ashton said. But they dropped the clause after talking with Hernandez and other legislators, who told them securing any funding was unlikely.

“We came to the consensus that if we attached funding to our bill, it was probably going to die,” Ashton said. “We decided not to risk it.”

The students took the funding-related asks and packaged them into a House proclamation, along with other mental-health issues that were important but didn’t need to be in the final bill, Hernandez said.

Hernandez has been impressed with the students’ organizing and advocacy efforts around such a “huge” issue, he said.

“Their strategy of coming in with step one and then coming back with other pieces is a really smart way of navigating what can be a tricky process here in Arizona,” Hernandez said.

Hernandez said legislators — even those who disagreed with the more brash die-ins and protests the group employed at the Capitol last year — have seemed willing to listen to the students’ concerns this time around.

The students’ bill has so far fostered wide bipartisan support, receiving majority votes in both the House Education and Public Safety committees. Seven of the bill’s sponsors are Republican and eight are Democrat.

Hernandez said the students have proven through their work drafting and lobbying for this bill that they are politically savvy and willing to learn and work with the system — something that is necessary if they want to further their causes promoting school safety.

“I think (they) are going to be really important, moving forward,” Hernandez said.

Ensuring all school staff know how to identify and help students who could be in crisis is an essential safety concern, Ashton said. The issue hits particularly close to home for him.

When Ashton was in eighth grade, before he moved to Arizona, he began to struggle with depression. He was being bullied consistently at school, as a gay kid living in a hyper-conservative town, and the stress became too much for him to deal with.

Logically, he knew he should talk to a school counselor , but didn’t even know who his counselor was. He had never talked to one, and they had never approached him.

His depression symptoms continued to worsen, and Ashton began to contemplate suicide.

One day after school, he waited for his parents and sister to leave and came up with a plan to shoot himself .

Luckily, Ashton couldn’t complete his plan because his father’s gun was locked in a safe. His parents found him sobbing at home and got him to open up about his depression. They started taking him to a mental-health counselor, starting his recovery.

Ashton, now 17 and preparing to graduate, is glad his parents locked up their gun. But he still feels conflicted about the fact his school didn’t think to reach out to him in that dark time .

“When I think back about that whole experience, it was a really dark time in my life. But I was at school for nine hours a day. I was at school more than I was at home,” Ashton said.

“How did my school not figure out that I was depressed and I was suicidal? They saw me more than my family.”

“That’s how you make schools safe,” he said. “Both in a physical and emotional way.”

Even when things are happy around you, doesn’t mean you need to be. It’s okay not to be okay #mentalhealth #mentalillness #bethere #listen ... See MoreSee Less

Interested in a NAMI Family to Family class? We have two classes starting soon! Contact 602-244-8166 for more details on how to register. ... See MoreSee Less

NAMI Valley of the Sun updated their cover photo.